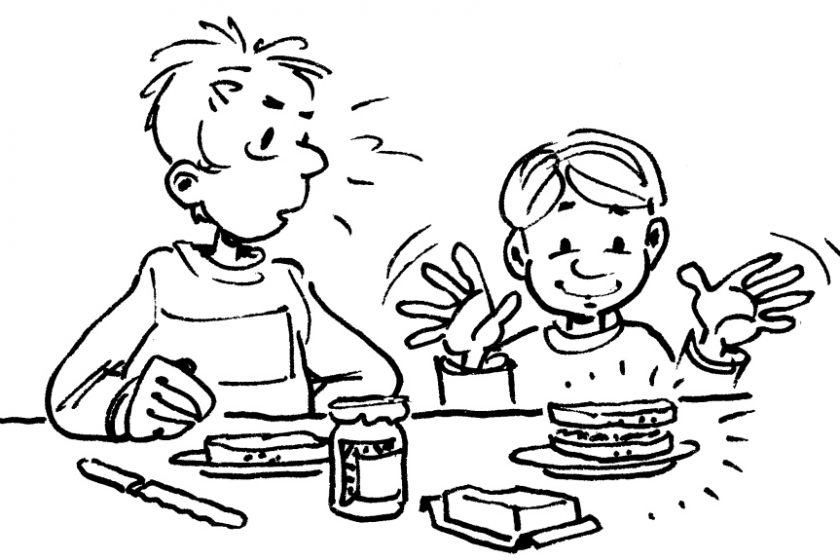 How can you limit childish moods?

Christian (3) and Markus (5) share the last 3 pieces of the brioche milk stollen: Markus chooses the larger piece, but Christian can have the two smaller ones. The little brother has butter and jam spread on it and eats them as a sandwich. Markus is disappointed: He would also have liked to have had a sandwich. Whereupon the uncle says: “You just have to cut it apart.” But Markus is frustrated and starts to rave: “No, then my sandwich is smaller than the other one!” The mother, patiently: “Look Markus, unfortunately we have no more brioche. But you can still have a roll. ”Instead of showing insight, Markus rages on: He doesn't like any of the options offered. The mother tries to comfort: "Next time ..." But every well-intentioned word is thrown out with the objection: "I don't want to ...".

Sometimes Markus really gets into his defiance until the good mood of the whole family is spoiled, mother's patience is torn, she insults him and sends him away from the table or "buys" him with tempting promises so that he can calm down again.

This time the uncle intervenes and says uncompromisingly: “Either you eat your sandwich now or I'll have it!” His friendly but firm voice and his clear look let Markus understand that he is serious. Markus is silent and eats. End of scene.

What does this example show? When a child becomes moody and defiant, it does not need more freedom and choice, but narrow, clear boundaries (either / or) to find support. Even if they protest briefly: Children love people who take them seriously and who act in a friendly but determined manner. Otherwise there is a risk that Markus will stylize himself as a little tyrant who does not acquire any tolerance for frustration and who always wants to have everything “better, nicer, bigger” than the others.

Childish reactions of this kind are normal and Markus is by no means a "bad child". By tightening the boundaries, it will also be easier for the mother to maintain her friendliness, instead of fluctuating from one extreme (donkey patience) to the other (shouting) and thereby making the child even more insecure.