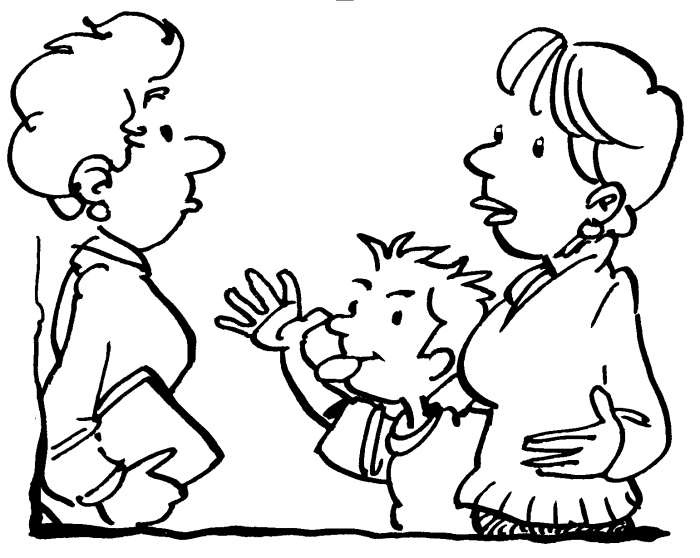 Are insults from the mouth of children harmless? How can we stop this?

Robin, 6, and his mother pick up their older sister from music class. The music teacher would like to briefly discuss a few things with the mother. Robin is silent when the teacher speaks. But every time the mother opens her mouth, he produces noises. The mother ignores this and continues to speak a little louder.

Since the mother does not react, the teacher says to Robin: “If you keep talking, I don't understand what your mother is saying. Please be quiet! ”To which Robin replies:“ Stupid cow! ”The mother still does not react. The teacher is silent and quickly ends the conversation with the mother.

The mother did not react when Robin drowned her out and not even when Robin hurled "Stupid cow!" At the music teacher when she asked him to be quiet in order to understand his mother's words. Embarrassed and helpless, the mother ignores her son's provocations. Maybe she's so used to these bad habits that she doesn't even notice it anymore. The teacher didn't react either, surprised and speechless. She probably didn't want to patronize the mother because it would have been her job to correct her son. Obviously, she also had no desire to take on responsibility for upbringing in this fleeting encounter and possibly gain criticism. At least one more person who allows Robin to push boundaries.

Are insults from a child's mouth harmless?

Robin cannot accept the limits of his mother, which the teacher can at first. With her he is quiet. However, when she asks Robin about his disruptive behavior towards mom, he transfers his disrespect to the teacher. He cannot stand criticism at all.

Why doesn't the mother say anything about her son's bad habits? In the present case, she has apparently already given up and is secretly hoping that they will go away on their own when Robin gets bigger. However, that hope is unlikely to come true by itself. Why should Robin change when he is very powerful by doing so?

Robin needs real attention and the feeling of being taken seriously. He gets that especially when adults set limits and trust him to be considerate. Otherwise he is trained in the role of the ruthless tyrant. He will behave accordingly, even step into it, because it makes him more and more angry inside to be ignored and thus not taken seriously. It's not about dramatizing childish bad habits or taking them personally. But children need adults who demand respect with understanding and consistency. This can also be done in a later discussion at a quiet moment.

Such small scenes reflect what happens frequently and on a broad scale in today's educational landscape: lack of clarity with regard to parental authority and a lack of orientation, solidarity and cooperation among adults - freedom as overburdening the youth.

Respect and perceive yourself

When setting limits, it is important that we perceive ourselves and take seriously what bothers us. So if you feel an irritation, then concentrate and ask yourself with all your attention: Something does not suit me: what is it actually that is bothering me? Would I allow an adult (my girlfriend, my boss, my partner) to talk to me like that? No? Then the child shouldn't do it either!

Otherwise it can happen that at some point the mother “spits out” and reacts surprisingly and unpredictably for Robin. Because he thinks: “Otherwise she won't say anything!” If we allow disturbances to build up until they explode, we usually miss the right tone. Then children are yelled at and verbally abused. We then basically blame them for letting it get this far. Isn't that unfair?

By allowing her son to behave disrespectfully, the mother conveys to him: “I am weak” and “I do not trust you to be respectful”. He then corresponds to these expectations quite instinctively.

Children want parents they can love and respect

Children have a need to love and respect their parents. They need reassurance that we are understanding and superior. Robin's annoying provocations arise from a deep, diffuse uncertainty. It is as if he were marching on soft, muddy ground that gave way under his steps so that he was in constant danger of sinking in. That makes you insecure, fearful, aggressive. Children need security and support. Adults convey this through understanding, clear and consistent speech and action. Then they can develop happily and in a balanced way.